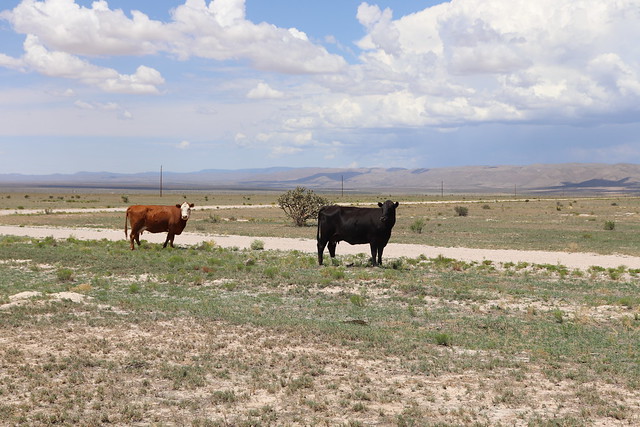 The “Little America’s Ranch” is located on the Otero Mesa, a unique formation in the desert region of south-central New Mexico. The mesa lies between the lower desert and the Guadalupe Mountains. Elevation is between 4,300 feet and 5,100 feet with the majority being 4,200 to 4,500 feet.   The terrain is basically level with only a few areas of low hills or mountain foothills. Wide, long draws and large, flat flood plains are common; these provide extremely beneficial areas of forage production from run-off rains, which are common in the growing season. Precipitation varies from 10 to 12 inches per year; but with the run-off rains, large areas of grasslands receive a tremendous amount so moisture, thus the unusually large amount of forage production. The long growing season of over 210 days and favorable variety of cool and warm season grasses, along with annual weeds, provide an unusually large amount of forage production.  This is uncommon for the southern desert region of New Mexico and other arid regions of the southwest, which benefits the stocking rate of the Ranch.   Forage includes a wide range of grasses and browses along with numerous annual weeds. Grass varieties found include: black grama, blue grama, side-oats grama, six weeks grama, sand dropseed, bush muhly, three-awns, tobosa, sacaton, etc… Browses and shrubs include: yucca, Morman tea, chamiza, mesquite, creosote brush, cactus, etc…

Ten wells all are equipped with electric submergible pumps or solar pumps.  The current owner has added an extensive pipeline system by installing approximately 60 miles of new inch and a quarter poly pipeline, rubber tire drinkers, and 40 or more enclosed poly Storage tanks ranging from 5000 gallons to 10,000 gallons. Most of the pipeline systems are tied together with only a valve, enabling water to be directed all over the ranch.  There are numerous dirt tanks that have held very well.  The wells vary in depth from approximately 450 feet to 1,080 feet. Water quality is considered very good.

The carrying capacity is rated by the Bureau of Land Management “BLM” to be 1,404 Animal units. The allotment is in good standing with the BLM and is in maintain “M” category. The Allotment is a “Section 3” permit which means the BLM regulated/controls the whole Ranch concerning carrying capacity. This has been in effect for many decades and is a realistic number for the Ranch.   The Ranch has been run as a cow-calf operation stocked with 800 to 900 cows and 60-65 bulls. Production has been good, with good calving percentages (85-90%) and heavy weaning weights (475 to 650. With an average of about 550 lbs.).

Located at the headquarters are two new modular homes, a cook shack to feed the hands,  an insulated shop, a barn, saddle house, sheds, and corrals. These improvements are in very good condition. Range improvements include fences which form fifteen pastures and five traps.

The ranch offers a wide variety of wildlife with Antelope, Mule Deer, Oryx, Coyote, Bobcats, Quail and many other desert animals.

The “Little America’s Ranch” is located in a unique area with the reputation of high forage production. Seldom does a ranch in this area come up for sale, most have been in the same family for many generations. Adjacent to the northwest part of the Ranch is the McGregor Military Reservation. When forage conditions are adequate portions/pastures of this reservation are leased for grazing by the BLM mostly for seasonal grazing for 6 to 10-month periods. It is common that these lessees return year after year because the cattle perform so well.   This is a no-frills operation but production expenses are very low and cattle production is high!

Home
About Us
Links
Sold
Location/Contact